The Family Tree of Lake Amphibians: 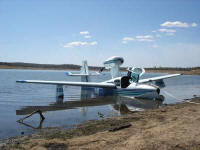 “It was interesting to read that my current aircraft S/N 311 (photo above) gets a mention as the prototype Buccaneer. “That was good to see; I had understood that it was a Buccaneer prototype, but was never sure. Of all the 20+ Lakes I have flown, it is one of the best and I still get a great thrill every time I fly it.” — Kevin Bowe Flying Boat Endorsements, Australia 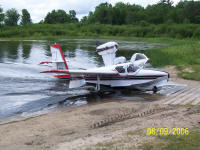 1967: Several interesting variations of the plane were developed, including one with a hydrofoil/ski, one with no landing gear, and one with a hover cushion.  None of these saw any follow-on production. 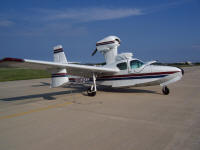 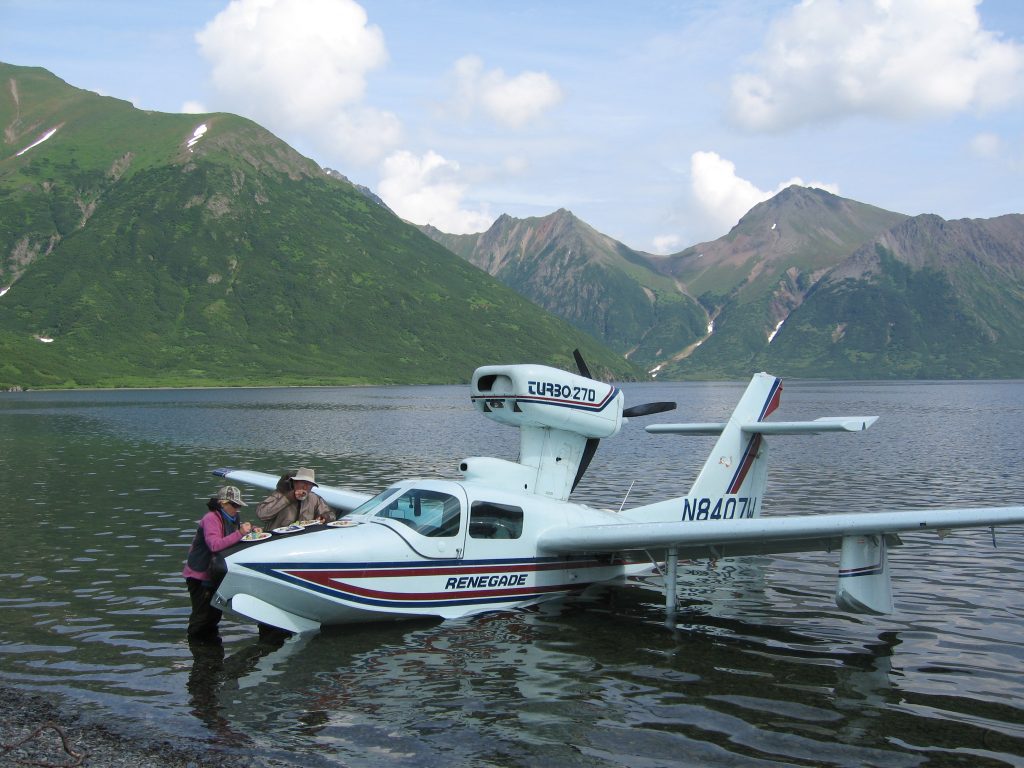 A Thumbnail Sketch of the History of the Lake Amphibians

Designed by David Thurston, the prototype C-1 Skimmer was built in the mid 1940s and first flew in July of 1948. At the time, Thurston was employed by Grumman and several aviation specialists were employed to help build the little amphibian. One of these was Herbert Lindblad, who at the time worked for Republic. David had formed the Colonial Aircraft Corporation with the intention of eventually producing the aircraft. The Korean War interrupted the flight testing, but finally a type certificate was issued and production started in 1956 after the company moved to Sanford, Maine. Sanford was chosen because of the airport and large empty woolen mills making for a ready-made factory at a fraction of the cost of one on Long Island.

The production C-1 Skimmer was powered by a Lycoming 150 horsepower engine, could sit 3 people, stalled at 50mph and cruised about 110 mph with a 34 foot wingspan. The company built a total of 23 C-1 Skimmers through 1957 while designing a 4 seat, 180 horsepower version. This went into production in 1958 and 1959 and the company built 20 C-2 Skimmers. The primary salesperson involved during this time was John F. Strayer, a former test pilot for Grumman. At the end of 1959 he bought the manufacturing rights, renamed the company Lake Aircraft Corporation, and renamed the airplane, the Lake Amphibian.

Some design changes were made by Strayer which included lengthening the nose to enclose the nose gear when retracted, and adding 2 more feet to each wing, which resulted in 50 pounds more useful load. Colonial Aircraft Corporation under Herbert Lindblad built the parts for Lake Aircraft and David Thurston went on to other enterprises and designs. Strayer built about 24 Lake amphibians during 1960 and 1961 and unfortunately went out of business. No aircraft were built in 1962. Strayer was later to work for Pepsi, skywriting the word “PEPSI” all over the country.

Meanwhile, new financing was found and in 1963 M. L. Alson, of Elkhart, Indiana took over the sales of Lake Amphibians. Alson was responsible for getting Brantley Helicopters off the ground (pun intended). He was under contract to purchase each Lake built by Aerofab, Inc., a new company formed by Lindblad at Sanford, Maine. This arrangement was to last for many years. It was not an easy job selling Lakes. They were a well-built, nice flying, docile amphibian, but a wee bit on the slow side, and a wee bit lacking in useful load and all along, needed more horsepower.

In 1970 Alson introduced the 200-horsepower, Lake “Buccaneer” about the same time he moved the company to the Houston, Texas area. Sales improved considerably because of the extra horsepower, gross weight, and performance, plus year-round flying capabilities. Aftermarket turbochargers became available, also, along with much lighter avionics. “Al” Alson retired in 1979 after selling the company to Armand Rivard of Laconia, New Hampshire.

Rivard had been a very successful dealer since 1973. He closed the Houston office and moved the operation to Laconia and Kissimmee, Florida which was beginning to boom, due to the Disney complex. Sales became a little sluggish in the early 1980s and Armand responded with a few changes to the Buccaneer. Namely, the introduction of the Lake EP which included many improvements. The EP had an enclosed rear cowling with an extended propeller shaft and a balanced engine. A cargo door, wing fillets, plus fuel in the floats were now standard equipment, all of which improved performance.

For years Lake pilots have said that the amphibian should have 250 horsepower. Rivard, Lindblad, Paul Furnee and others designed and introduced the “Renegade” in 1984, with substantial changes. Namely, 4 or 6 places, an extended hull and a totally new tail design. Performance increased considerably along with the load carrying ability, not to mention its ability to land and take off on much rougher water. A few years later the factory followed with a turbocharged 270 horsepower version which added high altitude use to its attributes.

Over the years the cost of a new Skimmer or Lake went from about $16,000 to over $500,000 for many reasons. Sales of Renegades have been very sparse in the last few years, the last one built under contract, in 2006. Armand sold the company in 2003, only to regain it a year or two later, minus a rather large asset — the factory and hangar at Sanford. Many parts are still being supplied. To date there have been about 137 Renegades produced, with a total of approximately 1050 Skimmers and Lakes built since 1956.

WordPress Video Lightbox
Information for LakeFest 2023 is now available in the Fly-In section of the website, and the event has been updated to allow ya'll to register on-line. So, ..... what are you waiting for??? And don't forget to make your reservations at River Ranch!!Click here for details and to register
+

Please confirm you want to block this member.

You will no longer be able to:

Please note: This action will also remove this member from your connections and send a report to the site admin. Please allow a few minutes for this process to complete.

You have already reported this .