Over the years, much has been written about Lakes in most of the aviation media. While it might seem dated, it is no less relevant now that when it was first published. While no longer in production, the Lake is far and away the largest amphibian family in the world, and its attributes continue to draw fans who often will claim they “could not imagine flying anything else!”

Here are a number of reviews, travelogues and publications to help you understand a little more about the Lake Amphibian.

Special thanks to Team Lake for their contributions. 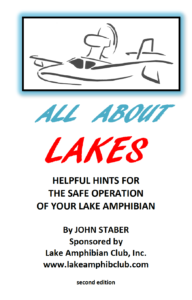 A light-hearted, but very valuable perspective, on flying, owning and maintaining a Lake Amphibian, written by John Staber who has over fifty years experience on the subject.

WordPress Video Lightbox
Information for LakeFest 2023 is now available in the Fly-In section of the website, and the event has been updated to allow ya'll to register on-line. So, ..... what are you waiting for??? And don't forget to make your reservations at River Ranch!!Click here for details and to register
+

Please confirm you want to block this member.

You will no longer be able to:

Please note: This action will also remove this member from your connections and send a report to the site admin. Please allow a few minutes for this process to complete.

You have already reported this .